See the light after several months of darkness in the underground

The prisoners in underground Jadriya bunker were saw the light in 14-11-2005 after several months spent in the dark. 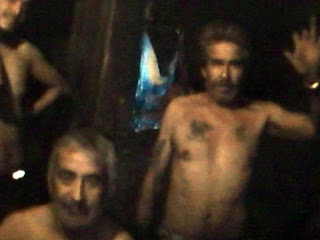 All 33 miners of Chile underground nightmare see light
Thursday, 14 October 2010
In a flawless operation that unfolded before a hopeful, transfixed world, 33 miners who were trapped for more than two months deep beneath the Chilean earth were raised one by one Wednesday through a smooth-walled shaft of rock.
The longest underground nightmare in history has ended safely - and faster than anyone expected.
According to the Associated Press, the last man out was the one who held the group together when they were feared lost, a shift foreman named Luis Urzua who enforced tight rations of their limited food and supplies before help could arrive.
"We have done what the entire world was waiting for," he said immediately after his rescue. "We had strength, we had spirit, we wanted to fight, we wanted to fight for our families, and that was the greatest thing."
Not even a full 24 hours after the rescue began, Urzua made the 2,041-foot ascent in a rescue capsule called Phoenix and emerged from a manhole-sized opening in the ground to a joyous celebration of confetti, balloons and champagne.
Chilean President Sebastian Pinera told him: "You are not the same, and the country is not the same after this. You were an inspiration. Go hug your wife and your daughter." With hardhats held to their hearts, the pair led a joyous crowd in singing the national anthem.
The first rescue worker down was last up - Manuel Gonzalez, a mine rescue expert with Chile's state-owned Codelco copper company, talked the men through the final hours inside the mine. Then, he spent 26 minutes alone down below before he strapped himself into the capsule for the ride up. He reached the surface at 12:32 a.m. Thursday local time to hugs from his comrades and Pinera.
The rescue exceeded expectations every step of the way. Officials first said it might be four months before they could get the men out; it turned out to be 69 days and about 8 hours.
Once the escape tunnel was finished, they estimated it would take 36 to 48 hours to get all the miners to the surface. That got faster as the operation went along, and all the miners were safely above ground in 22 hours, 37 minutes.
The crowd in "Camp Hope," down a hill from the escape shaft, set off confetti, released balloons and sprayed champagne as Urzua's capsule surfaced, joining in a rousing miners' cheer. In the capital of Santigo, hundreds gathered in Plaza Italia, waving flags and chanting victory slogans in the miners' honor.
In nearby Copiapo, about 3,000 people gathered in the town square, where a huge screen broadcast live footage of the rescue. The exuberant crowd waved Chilean flags of all sizes and blew on red vuvuzelas as cars drove around the plaza honking their horns, their drivers yelling, "Long live Chile!"
"The miners are our heroes," said teary-eyed Copiapo resident Maria Guzman, 45.
One by one throughout the day, the men had emerged to the cheers of exuberant Chileans and before the eyes of a transfixed globe. While the operation picked up speed as the day went on, each miner was greeted with the same boisterous applause from rescuers.
"Welcome to life," Pinera told Victor Segovia, the 15th miner out. On a day of superlatives, it seemed no overstatement.
They rejoined a world intensely curious about their ordeal, and certain to offer fame and jobs. Previously unimaginable riches awaited men who had risked their lives going into the unstable gold and copper mine for about $1,600 a month.
The miners made the smooth ascent inside the Phoenix capsule - 13 feet tall, barely wider than their shoulders and painted in the white, blue and red of the Chilean flag. It had a door that stuck occasionally, and some wheels had to be replaced, but it worked exactly as planned.
Beginning at midnight Tuesday, and sometimes as quickly as every 25 minutes, the pod was lowered the nearly half-mile to where 700,000 tons of rock collapsed Aug. 5 and entombed the men. 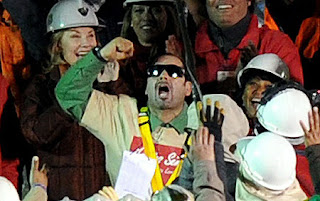 Then, after a quick pep talk from rescue workers who had descended into the mine, a miner would climb in, make the journey upward and emerge from a manhole into blinding light. nepalnews.com
مرسلة بواسطة سحاب Sahab في 7:10 م