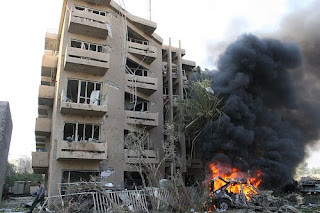 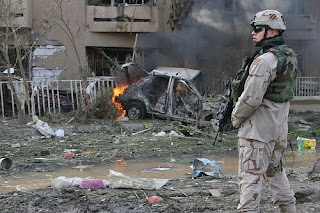 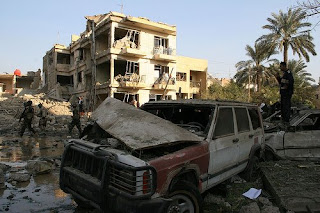 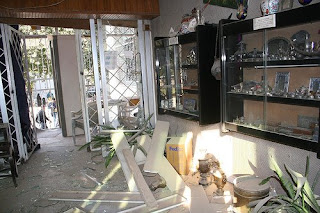 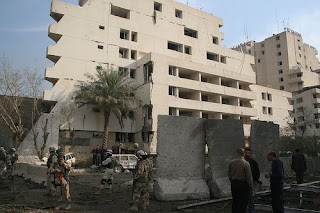 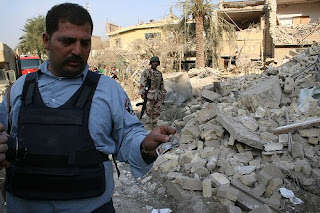 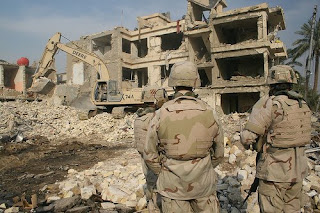 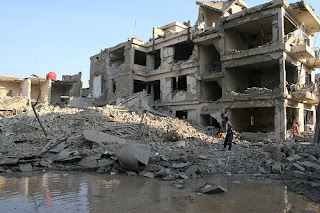 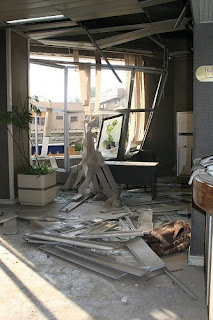 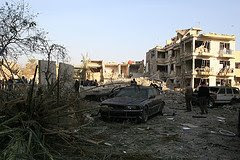 In Baghdad, the attack on the Hamra hotel began about 8:12 a.m. when a white van exploded along the concrete blast wall protecting the compound, blowing a hole in the barrier. Less than a minute later, a water tanker packed with explosives plowed through the breach in an apparent bid to reach the hotel buildings.
Eight Iraqis killed in BaghdadBut the driver — apparently blocked by smoke and debris — detonated his vehicle just inside the barrier, destroying several nearby homes and blowing out windows in the hotel. Eight Iraqis were killed and at least 43 people were wounded, officials said.
“What we have here appears to be two suicide car bombs (that) attempted to breach the security wall in the vicinity of the hotel complex, and I think the target was the Hamra Hotel,” U.S. Brig. Gen. Karl Horst told reporters at the scene.
News organizations housed at the Hamra include NBC News and The Boston Globe.
NBC’s Mike Boettcher reported that guests at the Hamra were jolted out of their beds by the first blast. Recalling their training, they braced in anticipation of a second explosion, which happened shortly afterwards.
Media targeted beforeThe tactics in the Hamra attack were similar to those employed in the Oct. 24 triple vehicle assault on the Palestine Hotel, where employees of The Associated Press, Fox News and other organizations live and work. In that attack, which killed 17 Iraqis, one vehicle blew a hole in a concrete blast wall, opening the way for a cement truck packed with explosives to penetrate the compound.
The truck detonated only a few feet into the compound after U.S. troops raked the vehicle with automatic fire and the driver got stuck in debris. A third vehicle went off a short distance away.
Boettcher said on the “Today” show, “We were blown out of our beds.”
“We got down on the floor and crawled, and then the second bomb hit, and we were blown back,” Boettcher said. “To be in the middle of this — not a pleasant experience, but I feel a lot more sorry for those people who were killed just outside our compound, who didn’t have that blast wall to protect them. That saved our lives.”
Sa’ad al-Izzi, an Iraqi journalist with The Boston Globe, said he awakened “to a huge explosion which broke all the glass and displaced all the window and doors frames.”

The attack against the Shiite worshippers occurred amid rising tensions between Iraq’s majority Shiite and minority Sunni communities. Tensions escalated after last weekend’s discovery of 173 malnourished detainees — some bearing signs of torture — in an Interior Ministry building in Baghdad seized by American soldiers.
Most of the prisoners are believed to have been Sunni Arabs, and the discovery lent credence to allegations of abuse leveled against troops controlled by the Shiite-led Interior Ministry.
Interior Minister Bayn Jabr said the torture allegations were exaggerated, but the government has agreed to investigate lockups nationwide.
Sunni Arab politicians and clerics have demanded an international investigation and have said they would not accept findings of any probe in which the Iraqi government played a role.
Louise Arbour, the U.N. high commissioner for human rights, endorsed calls for an international probe “in light of the apparently systemic nature and magnitude of that problem.”
“I urge authorities to consider calling for an international inquiry,” the former U.N. war crimes prosecutor said in Geneva.
مرسلة بواسطة سحاب Sahab في 1:03 ص