"For one Iraqi general, a tale of lost hope and honor " A section of the article By Ned Parker, Los Angeles Times Staff Writer . 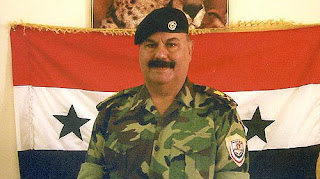 The Jadriya bunker
Violence continued as the December 2005 national elections approached. Sunni militants carried out a campaign of suicide bombings and Shiite militias abducted Sunni men, with many of their bodies dumped beside a sewage plant in east Baghdad.
Sunnis in Adhamiya held a protest, demanding to know the whereabouts of their relatives who had disappeared or been jailed by the national police, an elite force that included Shiite militiamen.
A tip from Daini about a missing 15-year-old boy helped track the teenager to a police bunker in the middle-class district of Jadriya. U.S. officers in Baghdad decided to raid the center and, knowing the move could strain U.S. relations with the Shiite elite, asked Daini to come along.
When they arrived, the building supervisor insisted that there were few detainees there. The Americans ignored him and broke down a locked door. It led into a cramped, dark hallway holding more than 160 detainees.
The troops gave IV fluids to the emaciated detainees, some bruised and some covered with blood.
They couldn’t find the boy they were looking for, but Daini recognized a teenager from his own neighborhood who had been stopped by police at a checkpoint, clubbed with a rifle and taken away. His family had assumed he was dead and had held a funeral for him.
Afterward, Daini was criticized within the Iraqi army for not tipping them off about the raid.
“He was getting a lot of pressure from Ministry of Defense officials to lay low,” said the U.S. commander who supported Daini. “He stuck his neck on the line.”
مرسلة بواسطة سحاب Sahab في 5:57 م